After going to Heart of the Samurai with Klemmer and Associates, there’s little reason to not go on to Sam Camp which is the final offering from their program. My first call was this evening and it was a great kick off.

Having also worked with mastermind groups in other businesses, it’s great being in the midst of people who are there because they want to see you achieve great things as they do the same. It’s also because of this that some people ignorantly view Klemmer and Associates as a cult. Somehow providing positive support towards others is viewed as something kooky. The way of the world is to drag people down when they share a goal that might make a difference. Some may know this as a “reality check,” and I’m sure you have lots of friends who love to give them to you.

I already have groups of friends who are successful business owners, public speakers and multi-millionaires and groups of friends who are job-minded, and goal-less (unless you count their plan on what bar to hit this weekend). Because of this, I’m already sensitive to the mindset of others and tend to avoid discussing my goals with certain people. I found my experience going through Klemmer as a weeding out of people who are so plugged into “The Maxtrix” of entitlement thinking and then finally ending up with a diverse circle of friends who seek to reshape the world for the better.

At the end of Heart of the Samurai, each graduate is presented with a Samurai Sword. It’s well-earned. Mine was presented to me by Brian Klemmer which I found pretty groovy. 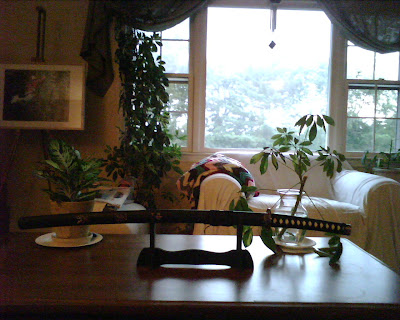 The sword has a lot of meaning because of the way it focuses the experiences gained throughout the entire program. It’s also a reminder that there are no problems in life which God cannot cut in two…which is why the sword is displayed with the blade pointing up.

What happens after Sam Camp? If nothing else, I end up with an awesome network of people and I’m a better person for knowing them. It doesn’t end there though. Find out for yourself.

Posted in Musings and tagged Klemmer and Associates